Warning: Use of undefined constant ENVIRONMENT - assumed 'ENVIRONMENT' (this will throw an Error in a future version of PHP) in /home/498960.cloudwaysapps.com/aqxvkvtvdb/public_html/wp-content/themes/crewexposed.com/parts/shared/html-header.php on line 26
Warning: call_user_func_array() expects parameter 1 to be a valid callback, function 'add_slug_to_body_class' not found or invalid function name in /home/498960.cloudwaysapps.com/aqxvkvtvdb/public_html/wp-includes/class-wp-hook.php on line 294

Warning: array_unique() expects parameter 1 to be array, null given in /home/498960.cloudwaysapps.com/aqxvkvtvdb/public_html/wp-includes/post-template.php on line 838

One of the most visible government ethics groups in Washington, D.C. is Citizens for Responsibility and Ethics in Washington (CREW). The seemingly uncontroversial CREW advertises itself as “dedicated to promoting ethics and accountability in government and public life by targeting government officials — regardless of party affiliation — who sacrifice the common good to special interests.”

CREW spends its time filing government complaints and the occasional lawsuit against politicians and interest groups it deems to be corrupt. It claims this is all done in a nonpartisan manner.

The group’s history and activities tell a very different story.

An analysis of CREW’s formal ethical and legal actions conclusively demonstrates the organization’s biased agenda. By every measure available, CREW’s claim that it is evenhanded in its treatment of Republicans and Democrats is not supported by its own paper trail. Specifically, an analysis of CREW’s activities in the following five areas demonstrates its bias. This is especially true when compared to non-partisan federal oversight and law enforcement agencies: 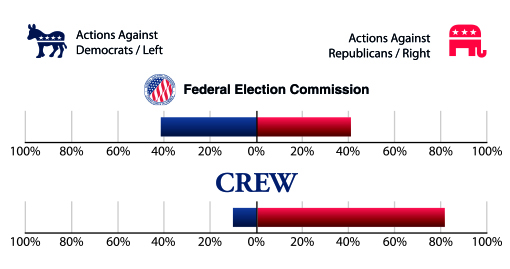 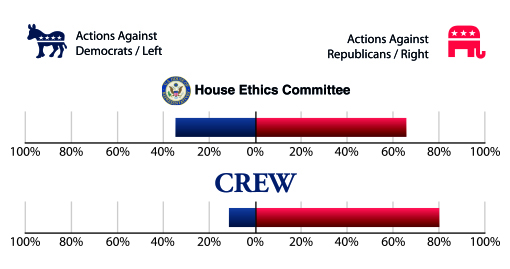 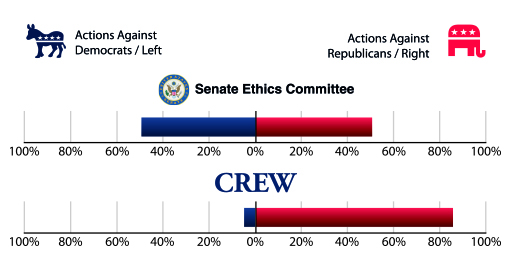 CREW’s former executive director Melanie Sloan claims that her organization filed more complaints against Republicans because theirs was the majority party for many years, making them more prone to corruption. But Democrats also managed to equal Republicans in ethics violations during the 18 most recent years when Republicans controlled the House of Representatives. Between 1995-2007 and 2011-2017, 23 members of Congress were officially sanctioned or were the subject of public disciplinary letters; 11 were Democrats.

In addition to its legal and procedural actions against specific members of Congress, CREW has also published a number of reports that allege corruption. But a review of these reports found several that were biased in favor of left-wing causes or individuals.